How many times have you finished a project only to start over? Like for those of you that fish; when you’ve waited all day for that big walleye, and as you pull it into the boat, you lose it, and recast your line. Or, if you’re a gardener; who has planted seeds that rain has washed away, you replant. And then there are those of you that like to sew; that have ripped out a seem on a dress that is too tight and resew it to fit.  Writing has been like that for me.

First draft, second draft, third, fourth, and fifth draft. I lost track of the number of times I rewrote The Lion of Tupungato story-line . It was hard for me to “scrape off” what I thought were great chapters, that in fact, were nothing more than muddy build-up; in order to create an interesting and passionate story. Taking a step back to study what I had created, and then carefully placing just the right steppingstone into the readers path, was backbreaking.

Let me show you an example of one chapter that was taken out of the book. I can’t give away the highlight of The Lion of Tupungato story. However, at one point something miraculous happened, to help this young girl gains strength. This chapter called, Bully Schmully, was simply too preachy and didn’t move the storyline along in the right direction, and so it was deleted.

That night, Isabel tossed and turned, thinking and worrying about Max and his terrible behavior. Remembering all that Pansy had taught her, Isabel got an idea, “Together, our class is much stronger than Max. We’ve got to stick together.” With her great plan to stop Max, Isabel had an extra spring in her step as she hopped into the school bus the next morning. She smiled at Lucia and Elisa who sat in the bench behind Max. Isabel whispered to each of the girls.

Max turned around, glaring. Gradually a squint appeared, and a grin arose. It was an awkward moment for the three girls. And then he began to laugh, “Listen to the three of you going on and on about that senseless Fiesta. It’s over, and you’re like three baboons, still chattering about it. In fact, the total sum of brainpower sitting on that bench right now is dumber than a baboon. I’ll bet you don’t even know what a baboon is.”

The girls looked at each other. Smirking, they paid no attention to him, as they turned their eye to the passing hillside.

Max soon moved his attention to the boys. Picking on Jose for sitting with Julio, and then poking fun at Julio. Max spared no one from his hurtful words. “Ho-o-liO…what a girly name,” Max chanted. Look at your skinny girly neck and hands. As Max was about to repeat his chant of Ho-o-liO, Isabel gently nudged Lucia and winked. The three girls started to sing a very popular little song about the cockroach. It goes like this, “The cockroach, the cockroach. He cannot walk anymore. Because it’s missing, because it does not have a little foot to walk.” They sang, “La cucaracha, la cucaracha…” over and over. Soon the boys had joined in singing. And before Max could say any more, all the kids were singing and laughing—and more importantly, ignoring him.

Max’s snide comments continued, on the ballfield, in the library, the lunchroom, and especially on the bus. Whenever someone with authority wasn’t around, Max took advantage of the tender ones that bruised easily. Even Jose and Julio didn’t hang around with Max anymore.

During a stormy ride home, the bus went off the road. Everyone huddled together. They spread warm jackets and coats over each other. Snuggling in shoulder to shoulder, Isabel unwrapped her left-over sandwich from lunch. Admitting to herself, “I’m so hungry I could eat two sandwiches.” She didn’t take a single bite. Holding out her hand she offered some to Jose, Julio, Elisa, and Lucia. Isabel confessed “I know one bite wouldn’t fill anyone stomach, but maybe it’ll fill a tiny hole in our hearts.”

Max Smith sat alone at the back of the bus, frightened, hungry and cold. Watching the other children, he started to cry. “I miss my old friends back in Saint Paul. They’re nicer than these kids.” 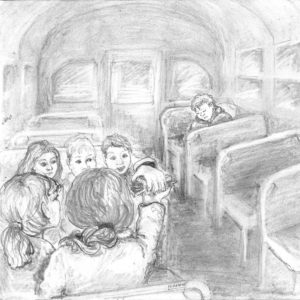 Isabel had only one bite left. She licked her lips, as the food came to her mouth. Looking up, Isabel saw Max crying. Knowing what it felt like to be isolated, she walked to the back of the bus and handed Max the last bite. Unhurriedly, he savored the jabali, and mixed vegetables, tucked in between the chewy dark-grained bread. He paused, swallowed his mouthful, and then cleared his throat. “I… I’m sorry for picking on you. Thanks for sharing your sandwich with a cranky, big bully.”

Isabel said, “Max you need to learn what I figured out from Pansy.” Facing him she softly said, “I know you’d rather be back home in Minnesota, but you’re not! And you can make the best of it here with us or you can make yourself miserable. Either way, you’re stuck here.”

Max reflected, “Ya well, you guys have been, friends all your lives. I’m an outsider. None of you ever really liked me. You all think I’m a big nasty rich kid that doesn’t belong here. You never include me in your jokes. When I try to say something to make others laugh, you turn away.”

Isabel gleaned a hint of innocence in Max’s eyes that she had never seen before. Very carefully, Isabel approached a tender subject, “Max, I’m not sure if you realize how much you hurt people.

“I don’t know what you’re talking about. I was just teasing you guys.” Max started to guard his feelings.

“Maybe you could work on being more careful, not to make jokes about someone you really don’t know. And when you think you’re being funny, make sure the one your teasing is laughing. Because if they don’t think it’s funny, –it’s not!”   Let me show you from a different prospective. You made fun of our local celebration. That’s a huge National Independence Day Fiesta. You weren’t only making fun of Lucia, Elisa, and me; you were making fun of our heritage, who we are, and what we believe in.

“Gee, wiz, I felt left out, because I wasn’t invited. It sounds like I was the only one that wasn’t at the celebrations, and so I didn’t want to sit and listen to all the fun you guys had without me. I guess that’s not your fault. I’d better go apologize to Lucia and Elisa.”

“There’s one more thing I think you need to know, Max. “Julio is skinny. And you might think it’s good to be lean, so you pick on him to make sure he doesn’t think he’s better than you. When in reality; Julio is skinny because his mom can’t afford food. Julio doesn’t eat breakfast. Have you ever taken the time to notice, most of his lunches are usually a stale piece of bread?

“Boy, I really feel bad about saying those things to Julio.”

What it really comes down to Max, is that it doesn’t matter if you’re big or little, male or female, or even if you’re a lion or a baboon. All living things need to be treated with respect. And if you show them respect and understanding, you’ll probably get the same from them.

“Wow, I never thought of it that way. I thought you guys were picking on me. I guess I’d better go say I’m sorry to everyone. Hey, Isabel, don’t take this wrong. I always thought you didn’t talk to people because you were stuck-up, but you’re really nice.”

That night every single child, even Max, huddled together waiting for the bus driver to return with help. Isabel wiped fog from the window with her sleeve. Peering out into the distance she saw a glimmer of light. “It must be getting close to morning,” she thought. As the glow began to grow rapidly, two beams of light came over the hill. Help had arrived! Isabel woke the others. Joyfully, they ran to meet the oncoming bus.

The trinket I took from this experience, that I may find useful when writing my next children’s story was not to underestimate the power of young people. They are smarter and more capable than some of us adults give them credit for. I learned, allowing the reader to find their own answers, brought a deeper meaning, and more authentic feeling in the ending.