The book The Lion of Tupungato did not start out as a story. It began as a lump of clay. A strange pairing of a lion’s face in a flower appeared in the clay. My first thought was to throw this sculpture back in the bag of wet clay. It could be put to much better use as a pot. But something stopped me from squishing it! 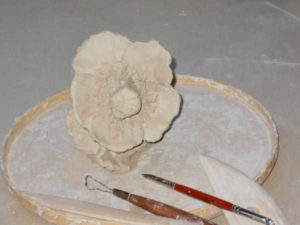 Driven to figure out why this little guy had come to life, I began to write. The lion’s story blossomed as fingers flew over the keys and words appeared on the computer screen. Most writers make outlines and research their subject. But in my wildest dreams, I couldn’t imagine this becoming a book. It was a naïve attempt to make something that made no sense at all, seem logical.

This fable is about a lion and a young girl. They meet in a snowstorm. The lion restores faith to this girl and to a dysfunctional town. In the end, the lion is remembered in a very special way. After I finished jotting down most of the story line, I learned of some uncanny similarities between what I’d written and reality. Pansies can withstand a light snow or frost, they have medicinal qualities, and the French word pansie means remembrance. Did all these serendipitous connections just happen, or was this a legendary story just waiting to be told?

After finishing this heartfelt story, I decided to make one hundred of these little lion figures. Working on them when possible, has caused me to sculpt in the most unusual places. One of the clay pieces was brought to life in Fergus Falls, Minnesota. My husband was working on other business as I conjured up another expressive lion.

While forming the clay, it occurred to me that this one was going to be the forty-second sculpture. I was halfway to my goal. Numbers swimming around in my head had become more important than the lion I was creating. Noticing the clay was becoming contorted and unruly, I realized, my way of thinking had to change.

Looking at the blob of clay, I dreamed of a grandparent giving this lion figure to their grandchild. Imagining the joy it would bring as they sat together reading about the lion’s adventure, changed my way of thinking. A glimmer of hope warmed my heart. At that point, I wasn’t sure if sculpting became easier or if I just became more patient. Once I concentrated on the meaning behind this project, it seemed I was guided to work the clay and discover the hidden lion. 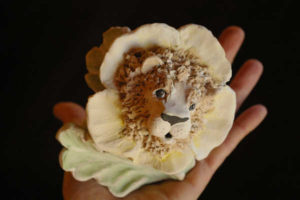 I have always enjoyed creating things and haven’t stop with this lion.

* The Lion of Tupungato is a very heartfelt story.
* Pansy, the Lion figure is pretty darn cute.
*Together, they’re an awesome gift set!

The trinket I took from this experience that may be useful when writing children’s stories, is that winning isn’t about the task of doing something for the sake of saying you did it. Nor is success simply about getting a “rock” in the “box” or chasing the “all-mighty” dollar. There will always be more boxes to fill and want of money. Time and time again I’ve found that one of the ways to happiness…is not to think about myself. But rather, think about the needs of others.
www.leannembenson.com