Writing is an archeological dig for me. The magic happens when excavating the collection of ideas in search of the hidden treasure. The problem started when my enthusiasm for writing, carried me off course and lead me to “start digging in Texas while standing in Argentina”. It’s been something we’ve joked about quite often at our house. And so, I thought I would share those amusing times and let you laugh along with me.

As a cardiac surgical nurse, Isabel was a vital member of the heart team. She met challenges with gusto. Eager to learn more about new medical breakthroughs, she could hardly wait for her supervisor to finish telling her about the heart conference, to accept the offer.

Stryker sat at the helm of the old helicopter, waiting patiently to make the return flight home. Isabel and the other six had just returned from the conference. The aggressive sun-rays felt as though they could melt a polyester shirt to Isabel’s shoulders.

The helicopter’s fuel gauges hadn’t moved off “full”, when Stryker received a distress call on the radio. A nearby control tower was transmitting on the emergency frequency channel 09. All aircraft in the area could hear the distress signal. After a minute, with no other aircraft response. Stryker keyed the microphone.

“We’re on it!” Stryker replied to the controller’s detailed message. Hesitant to admit to the others, the helicopter was nearly unstoppable except for two things. It didn’t like the heat, and it didn’t perform well in altitudes over 5000 feet above sea level. The flight plan he had just taken could put them into mountains over 8000 feet. Everyone on board agreed to take the risk.

Just when the search seemed an impossible task, Isabel pointed and yelled over the roar of the engine. “Look… over there… at the bottom of that ravine.” There wasn’t a flat location to land. Jumping out of the flying buggy, with one skid on the ground, was their only choice.

The sweltering heat and whirling sand were hard on the crew. The engine had to work twice as hard in the thin, hot air. The chopper was having trouble. There was little room for error in this tight spot. The helicopter could not take on any more weight or they may not make it out of the ravine. Isabel made the only decision she could think of and stayed behind. Through the worried eyes of one rescued passengers, a glimmer of thanks, was revealed to Isabel.

The engine revved louder as the helicopter pulled away from the rocky ledge, and slowly turned, to gain altitude. Unable to descend to gain speed, the aircraft swung back and forth. Taking an unexpected jerk toward the mountainside. Stryker pulled up on the cyclic control and fought to avoid the rocks.

Isabel could see the helicopter was struggling. As she watched it lunge toward the mountain, a flashback from her youth, of the terrible momentous airplane crash, vividly appeared. She closed her eyes. “I can’t look,” she thought. “Pull up, pull up,” she began to chant to herself. With her eyes still closed, she could hear the pitch of the rotors change. –The chopper was gaining altitude! Opening her eyes, she took a deep breath and then a sigh of relief, knowing they were going to be okay. The helicopter was out of danger and heading to towards the hospital.

Isabel sat down on the hillside as she watched the helicopter fade into the distance. Thinking of all the challenges and events that had given her the strength to do what she had just done; a smile arose on her face. She was grateful for her relationship with her father and thankful for Pansy’s friendship. It had been exactly ten years since Isabel had found her steadfast friend, lying next to the plane crash, on that snowy mountaintop so very far away…. And the story continues. The new path that leads to our conclusion in The Lion of Tupungato, now says. “It had been exactly one years since Isabel had found her steadfast friend on that snowy mountaintop.”

The trinket I took from this experience, that I found while writing this children’s story: Mistakes aren’t a bad thing. G. K. Chesterton once said, “Anything worth doing, is worth doing badly.” –And so, I stop questioning what to write, and just started typing.  I learned to, go ahead, type away, make run-on-sentences, get ideas out. Bad is better than a doing nothing. It’s working towards a better next time. 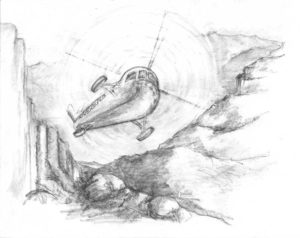 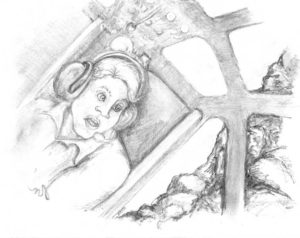