It’s fun creating costumes and impersonating a character, spending time pretending to be something you’re not, and laughing at the absurdity of it all.

I was one of those mothers that wouldn’t just buy my children a costume they happened to see in an advertisement. Instead, I would try to motivate them to create their own costumes. As they got older, they began to love the excitement of deciding on a costume and then constructing the image. We had hours of fun coming up with just the right look and even more fun acting the part of our characters. And they never ran into their double on Halloween night.

Creating mysterious Halloween images has always been exciting for me. And yet, for some reason I always wait until the last minute to come up with a costume. This year was no different. It was Tuesday morning, and I had barely started to put a costume together for a Writers Halloween party on Friday. Everyone was asked to dressed-up as their favorite character from a story they had written. I decided to be The Lion of Tupungato, as he appeared in the pansy flower at the end of my story.

Rummaging through my clothes, I found an olive-green skirt, shirt, and jacket that would make for a perfect pansy plant. My lion’s mane and tail had just arrived in the mail. With only two days to put this outfit together, I quickly dug through my art closet and found a few yards of old packing material. It was white, soft to the touch and yet stiff enough to keep the petals from drooping. With a few brush strokes to add color and a few tucks to add depth, it was a flower. 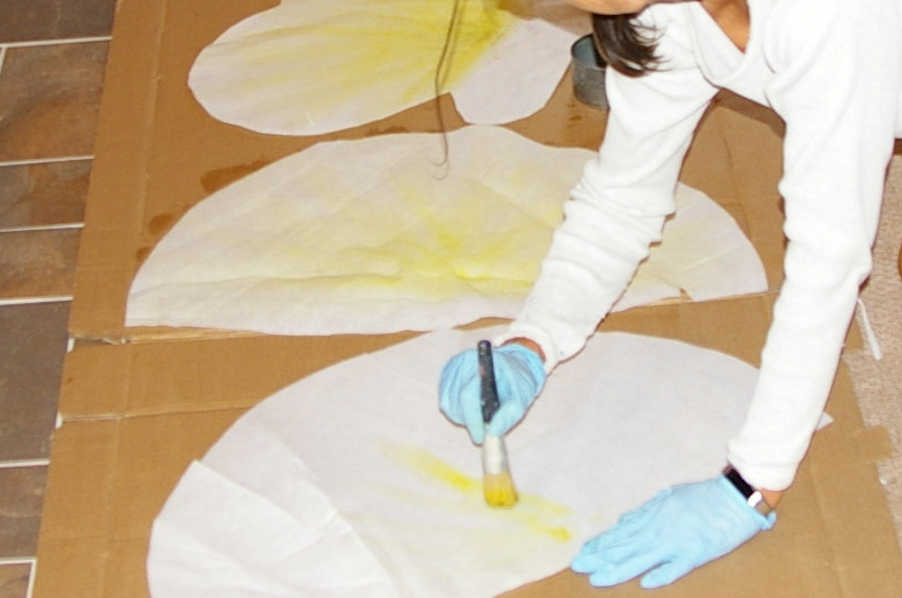 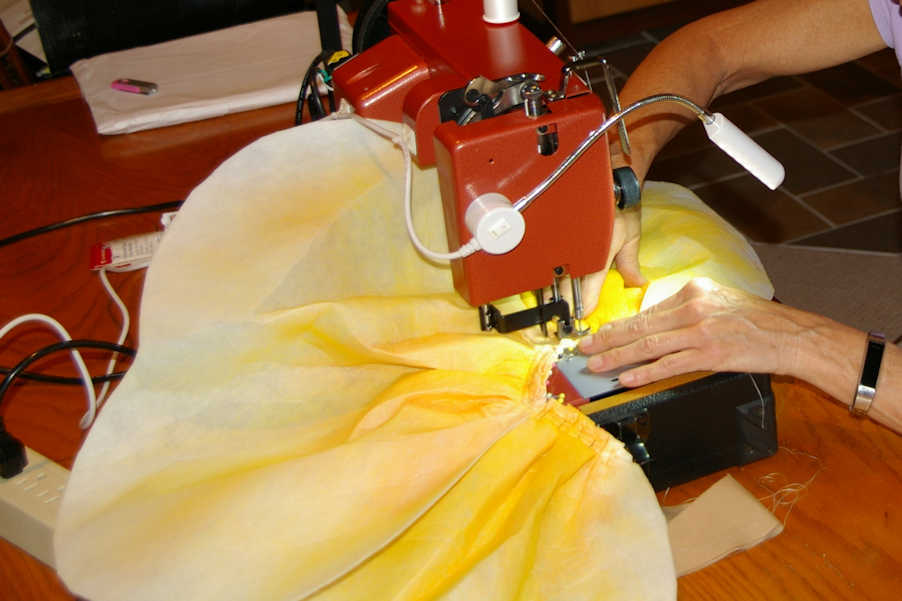 One of the most fun times I’d ever had creating costumes happened only a few years back. My Husband and I had been invited to attend a Pirate Bon Voyage party at the end of a trip we had been planning to the Bahamas. “All attending must dress as a pirate or wench,” the invitation stated. And so, we began working on the appropriate pirate attire.

A well-dressed young man came around the Good Will sales rack, just as I had grabbed a large brimmed lavender bridesmaids’ hat and plopped it on my husband’s head. Raising his eyebrows, he joked with my husband, “Nice Hat!” Ninety-nine- cents, some black spray paint, and three tucks later we had a pirate’s hat.

My husband is not a scary looking guy. Trying to give him an evil pirate appearance, wasn’t working! Eye liner only added intrigue, rather than the sinister look I was hoping for. Each attempt at making him into a scary pirate, only made me laugh harder.

Wrapping a bandana around his forehead with a long wig attached didn’t create that villainous look. On the contrary, it looked more like my mother wearing a bandana with bangs sewn in the front during the 1960s. Each time I looked at my husband, I couldn’t help but see this image of my mother in this scarf with fake hair attached. And the more I thought about it, the harder I laughed. Smiling, he stood quietly. Once I regained my composure, he would return to his silly pirate improvisations. Ar-r-r! 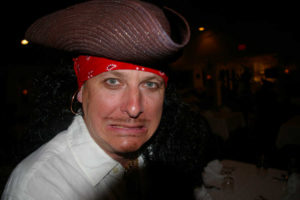 Digging around the house for my costume, I found an old leather vest, a blousy shirt, some black Capris, and a western leather hat. Making the three tucks in the hat, I was done! There was only one problem. I looked more like Paul Revere than a pirate. Our costumes were far from perfect, but we had fun and that’s worth more to us than any prize offered.

At the end of the ten-day island-hopping journey, it was time to say good-bye to this wonderful travel group. My husband and I walked into the party room, where all the other travelers stood dripping with expensive pirate costumes.  It was a bittersweet ending. Just when disappointment of leaving the beautiful Bahama islands was brought up, they announced the winners of the best couple’s costume. My husband and I had won a free night stay at three different resorts. 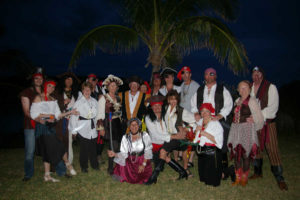 Has Halloween become America’s favorite holiday? And if so, might it be because, Halloween doesn’t come with all the baggage the sales industry has made around Christmas? Halloween isn’t about defining and separating us, from others who believe differently.  It isn’t about gifts or hosting a wonderful dinner or spending time with loved ones.  Halloween is a time to hang out incognito with a bunch of others. Leave our cares and worries about the world, behind, –if only for one night. We don’t need to plan. Just enjoy the spontaneity of it all.

The trinket I may use from these experiences to write children’s stories is this: It’s okay to pretend to be someone you’re not, for one night. However, all that time spent running around to please a few special people in your life and giving them your love, —is worth all the groundwork when life gets tough.

P.S. There were lots of great costumes at this party.  Thanks ladies, for being a few of the brave one to pose for this picture. I won most creative costume.