Don’t you just love watching those extras, at the end of a DVD? Those edits, out-takes, and interviews, adding an extra dimension to the story. It amazes me how one small edit can change the way I feel about the movie.

Imagine the difficulties Charles Dickens or William Shakespeare experienced, holding a quill over a blank page, while a mound of crumpled papers accumulated on the floor. The fatigue, and tedious labors of handwriting the entire page over numerous times, it is inconceivable to me.

Computers have made everything much easier, including the writing process.  While creating “The Lion of Tupungato”, I made a multitude of changes. So many modifications, that if I were to have kept each word in this short children’s book, it might have made Atlas Shrugged, by Ayn Rand https://en.wikipedia.org/wiki/Ayn_Rand, appear brief.

It was a struggle for me, to stick to the standard story-line, yet write something that stood out from the masses. At one point I thought the below epilogue would be a good conclusion to my story about this lion that had been taken from a thirteen-year-old girl. However, the concept of stretching the story out for years, just didn’t seem to fit for children. I still wonder if I should have used it. What do you think?

It had been raining all night. Lush green leaves glistened with the first rays of sunshine. Birds were singing in its branches. Pansy sat in the shade, looking at the valley below. A gentle breeze, carrying a familiar smell, ruffled his mane. His eyes followed the scent to a sun hat rising over the hill. Under the brim, a face appeared. Sparkling brown eyes looked up at him as a graceful woman walked closer. Pansy gazed in amazement, not because people were seldom seen entering the park reserve, but rather, because this beautiful woman –was Isabel.

Pausing, to wipe the happy tears that blurred Isabel’s vision, she murmured, “Can this be true?” A slice of sun reached through the tree leaves and touched the lion’s mane with a tender glow. Taking a couple of fast strides toward him, she shouted, “Pansy!” louder than intended. Her feet raced uncontrollably as she crashed into her gentle giant.

Pansy snuggled next to Isabel and purred softly as she scratched his belly and rubbed his nose. Reaching around his fluffy mane like she had done a thousand times, Isabel squeezed him tightly. Only then was she sure, this wasn’t a dream. She had finally found him!

The trinket I took from this experience, that I may find useful when writing children’s stories: It’s not necessarily the smartest person that succeeds, but the one that doesn’t give up.

I’ll be sharing more outtakes next time.  Till then, keep reading with kids! 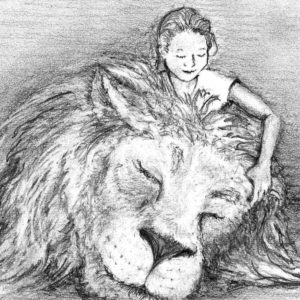 Read “The Lion of Tupungato”, with thirty illustrations.